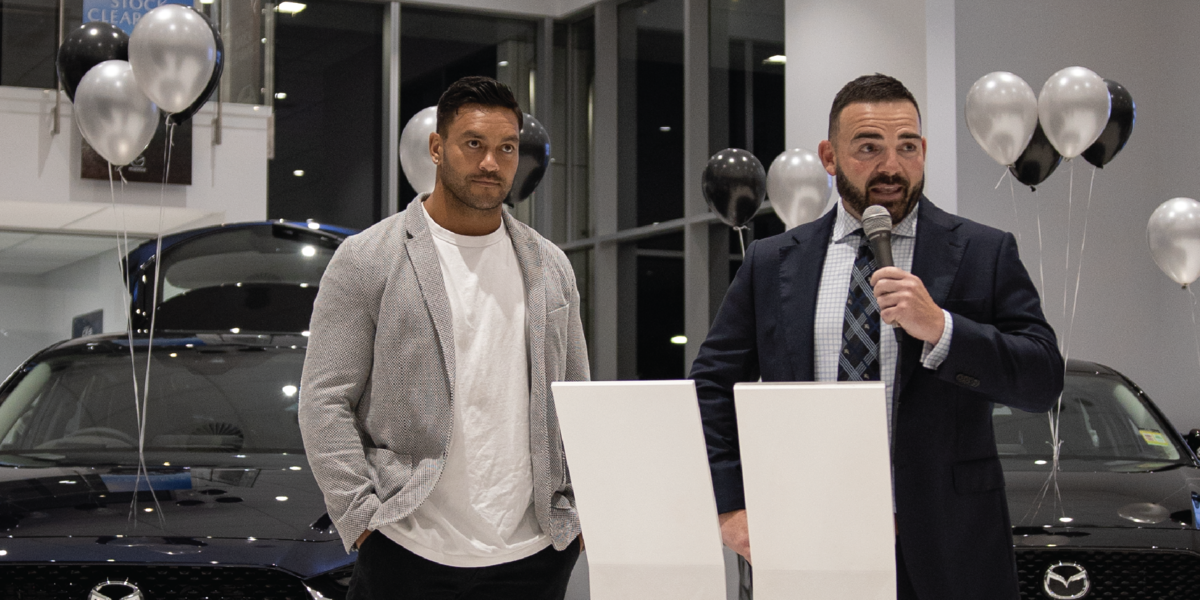 There’s plenty of NRL footy legends in Australia right now and plenty more fans looking up to the next great captain. Alex Glenn isn’t new to the scene, having started with the Broncos in 2009, he is a long standing integral part of the team. We are also very lucky to have him onboard as one of our long standing ambassadors at Grand Prix Mazda Aspley. We were lucky enough to sit down and have a chat about his career and the upcoming year ahead.

Going into his 11th year with the club, Glenn has finally landed the coveted title of Bronco’s captain. As he knows all too well, it comes with a whole lot of responsibility especially filling the shoes of such iconic NRL players.

“In my eyes, Darren Lockyer is the biggest icon and idol rugby league has ever had. Especially to me, he was a huge idol and he was my captain coming through. He was one of the best in the game and everything he did he led through his actions. Whether it was training, whether it was stretching, recovery, the way he played the game. He just led from the front and that was one of the biggest things that I learnt from him.”

Alex struggled keeping his captaincy a secret from the boys, but it was even harder keeping the secret from his family.

“It was so hard. I couldn’t even tell my brother. I didn’t want anything to fall back and have the blame on me that if it got leaked. So I took no risk and didn’t tell my family. It was tough, but I just had to lock it up. Once it came out the boys were like, “I told you! You lied to me!” And I was like, “I had no choice!” They were understanding. Obviously it’s a huge honor and they understand you don’t want things like that to get leaked. But it was tough not to tell anyone, very tough.”

Alex’s focus is now on preseason training, after a suffering huge loss at the end of last season. He’s feeling confident the team is ready for the season ahead.

“Ah, the boys are in fine shape. In my 11 years, this has probably been one of the hardest pre seasons I’ve had... I guess just the way that we finished last year against Parramatta, losing 58-nil. It’s not the best way to finish a season and we used that on day one, as motivation, to make sure that never happens again. We’ve worked really hard over the last three months to make sure that we’re mentally a stronger team because we do have a young squad.”

“After doing so much training, pretty much six days a week for three months, you just want to play footy again. You’ve just been getting pushed physically and mentally that you want to go out there and actually see it all come out.”

Aside from footy, Alex has been working with Grand Prix Mazda Aspley on various projects over the past two years. After his love affair with the Mazda 3, he’s finally making the upgrade from Mazda 3 to CX-30 to fit the family.

“That’s the thing with Mazda. They always do things really well, they’re just changing the game, I’m noticing more and more Mazdas driving around on the street now. That’s credit to this company and what they do and the design, safety and technology that they’re putting into cars for an affordable cost!”

Alex will be featured in an upcoming campaign for Grand Prix Mazda Aspley, showcasing the latest CX models. He says it’ll be a great opportunity to get to know his family.

“I think that’ll be the cool part for me is having my kids and family along for the ride and seeing what we do behind the scenes. At the end of the day, that’s what Grand Prix Mazda Aspley is all about. That’s why I love this place! They’re like a family, they’re not a car dealership to me. They’ve always been like a family.”

You can check out Alex Glenn’s favourites, along with the entire Mazda CX range at Grand Prix Mazda Aspley or at www.grandprixmazdaaspley.com.au.